Amazing Facts about Lancaster Castle by Jack and Maaz

Did you know that the prisoners in Lancaster Castle had to do extra exercise if they were naughty? The castle was built with stone and there were small holes to protect the people firing arrows in the castle at the enemy.  There were holes called murder holes that you poured boiling water through right on to the enemy and you can still see cannon fire on the walls outside! 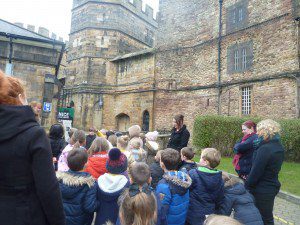 It was very rusty when we first when we went inside and the walls were full of broken stuff. The rooms were dark and the chains were so hard to pick up. There was a statue on the castle of John O’ Gaunt.

We liked it because there were such dark rooms and the fact there were lots of tangled wires on the walls. There was a dark dungeon and a light dungeon. We liked the dark one and wanted to be trapped in it. We would smash our way out with an axe!