Today, Indigo Class explored a wide range of objects and clothes that once belonged to an Anglo-Saxon man and woman. Their challenge was to use the artefacts as clues to deduce ideas about the people who would have owned and worn them. They also had the chance to feel the weight of Anglo-Saxon weapons and armour, the texture of Anglo-Saxon cloth and closely observe the intricate designs on some of the brooches and smaller artefacts. These items, which make historical learning hands on and real to children, were kindly loaned by the Lancashire Heritage Team. 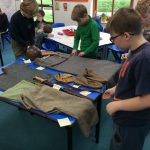 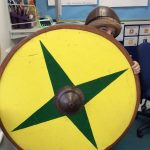 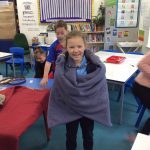