Ghastly pumpkins at a hellish disco and a trip into the past.

It may be November now but at Willow Lane School, strange spookiness is still going on and evil looking faces are being carved out of pumpkins, something I discovered today is surprisingly difficult…

We are preparing for the Halloween disco and each class has painstakingly created the most terrifying face they can possibly imagine (by looking at their class teacher) and these grinning pumpkins will be judged at tomorrow’s (Thursday) Halloween disco.

It might be difficult to make Willow Lane pupils look anything less than angelic but pupils, do try to wear something suitably spooky if you are coming. Blue class have no excuse as they were dressed up as Egyptian Mummies as part of last week’s History Afternoon.

As usual, it was great to see so many of you turn up to support the school and look at the work created over the term, play some historical games and have a nice cup of tea, served of course in an ‘authentic’ air raid shelter.

Everyone was keen to show off their outfits and it would appear that few houses in the immediate area still have pillow cases or sheets.

Viking Rune postcards were sent through the ages in Green Class whilst in Blue Class, many terrifying sights were to be seen ( even more than usual) as mummies and Pharaohs came suddenly back to life (with the help of a large amount of makeup and toilet roll)

Woe betide you if you had your World War Two fortune taken in Indigo Class. They delighted in telling you all manner of hideous war related fortunes like your street being bombed and ‘You Have Run Out Of Rations’, but things were even more sinister in Violet class as myself and my helpers were greeted by Henry the Eighth at the door, not something that happens every day (fortunately)

To the safety of Key Stage One and a strangely comforting smell to greet someone who has run out of rations. It is toast but not as you know it- it is being made into delicious shields by Yellow Class’s brave knights preparing to do snack based battle. All seems calm and peaceful until Aaargh! ! An unfortunate dummy is having his head chopped off by young knights practicing their sword skills!

As normal, all is peaceful and tranquil in Orange class with a flurry of Florence Nightingales and astronauts zooming off to space in a handmade rocket and Reception is full of some very inventive outfits but sadly when I smile at William and ask him about his, he bursts into tears.  And I haven’t even got my Halloween Mask on…

But tomorrow is the last chance for Willow Lane Pupils to wear theirs, and let’s face it, who doesn’t like an excuse to get dressed up like a witch and perform some devilish dancing? 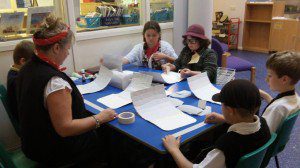 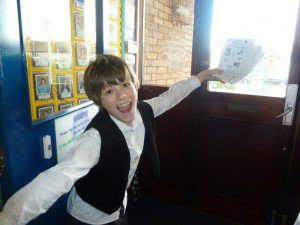 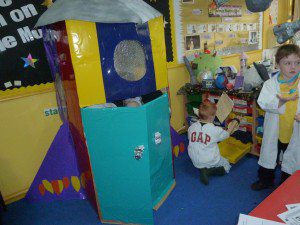 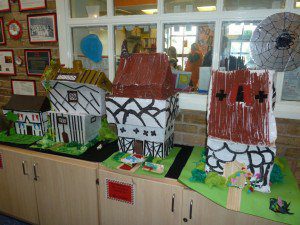 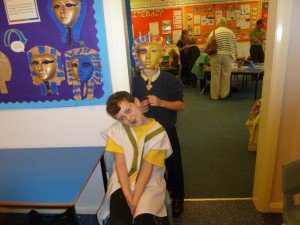 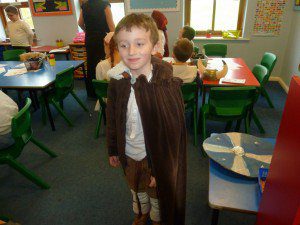