Let’s Eat Grandma by Arty-Fact theatre- a review by Megan and Elliot.

At first it started off with grandma playing around with making sentences with punctuation and asking people what punctuation was. She looked like a young grandma and she looked poor but nice. She had a grandson and a bird and he was lost in the forest and he was like ‘ Oooh I’m lost!’ and came back without his coat. The forest looked all dark and gloomy. There was a little chair for the grandson. 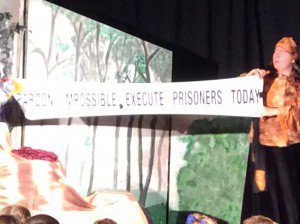 Grandma asked for his coat but then the bird came and pulled out a massive long story and asked children to add punctuation. Then a parrot turned up with a long sheet that was a sentence and you had to put full stops in it to make sense. There were four instruments and signs and cymbals and when the king wanted to say something about examples of when to use certain words they banged the cymbals.
A wolf came and was sneaking around smelling things and looking for the children but then a man came with a net and caught grandma instead of the wolf and she was dead mad! 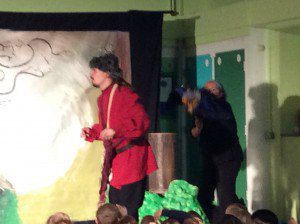 The woodcutter was best when he picked up the trap and when he trapped grandma in the net. Then the wolf actually came and scared the life out of the woodman who was being dead soft and said ‘Don’t eat me!’ and the wolf just walked off. Grandma came on and talked to the sad woodcutter who was sad because his children were locked away and could only be returned if he killed the wolf but they found the grandson’s coat that looked like the wolf skin and got his children back.

We both rate this play Ten out of Ten because it was only two people who ran behind the stage getting changed quickly so the children didn’t get bored. 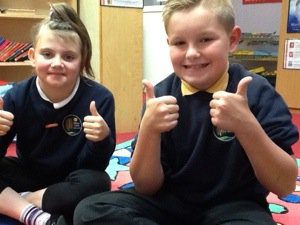 3 thoughts on “Let’s Eat Grandma by Arty-Fact theatre- a review by Megan and Elliot.”