So what happened in your class yesterday and why is everything covered in glitter?

‘Well, first we tried flowers, the ones that you can eat from the shop, I think the garage, orange and yellow ones. they tasted soft and really nice. I loved it. 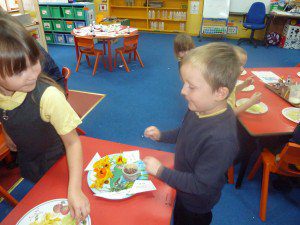 Not Cadburys Roses then?
NO! Then we tried lemons and limes and they were sour. I hate sour. Ugh!
Tyler- I like sour and it makes my face go like this… 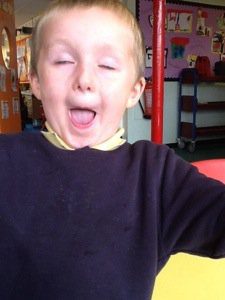 We tried this brown stuff and it tasted horrible.  It was a cocoa nib. Another thing you put it in your mouth and it makes noises. I swallowed it and I thought I was going to be sick but I wasn’t. It was popping candy.
Next we made fairy jars.

You put fairies in a jar?!

No, you get a bottle and get the top off, paint it, put glitter in it and then it glows up in the dark and you get a glo-stick and that glows too and you look at it in a cupboard. 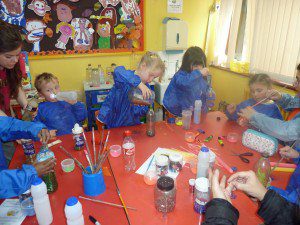 We were also making mints with water- you put water on them and can make a rainbow colour and you put milk on first and paint with sticks. 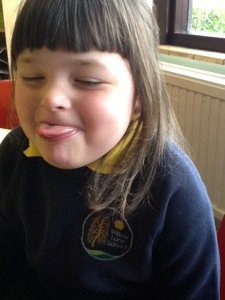 Seeing who could make the tallest tower out of marshmallows and spaghetti was fun too. Freddie’s mum made the biggest one.

The classroom was SUCH a mess at the end!