On Tuesday morning, Year 6 had a visit from Dr. Irene Wise, who is an engineer and lecturer from Lancaster University. We conducted three different activities using our knowledge of science, technology, engineering and maths (STEM).

For the first activity, we separated into different groups, all named after different inventors and engineers. We had limited resources to build the tallest, sturdiest tower to hold our 3D-printed robot as high as possible. Some groups found this tricky, though some managed to hold the robot at 40cm high using dried spaghetti. For the second activity, we went outside and the task was to use as few resources as possible to get the robot down a zipline – with bonus points awarded for ingenuity. The final task asked for the children to use the power of elasticity to get the robot as far over a pool of water as they could. This time, it was bonus points for keeping the robot the driest. The children thoroughly enjoyed their STEM morning with Dr. Wise and have learned so much from the session. Congratulations to the two winning teams on their achievements. 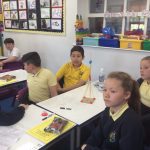 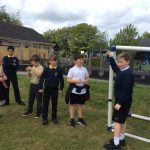 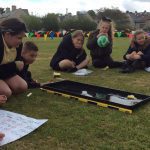